This is a convolution neural network with data augmentation that can successfully clone the behavior of a car to drive around a track. With the used of this model the car in the simulation can be driven autonomously around the track by executing python drive.py. The model was tested by running it through the simulator and ensuring that the vehicle could stay on the track. 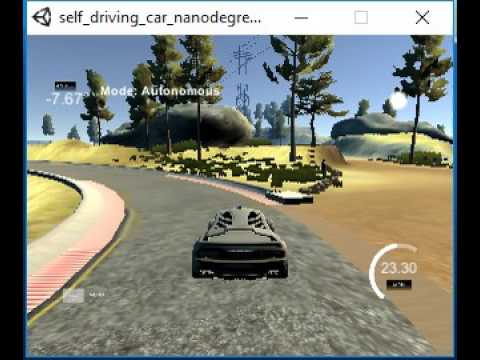 The data set consists of image data and steering angles to train a neural network and then uses this model to drive the car autonomously around the track. Training data was chosen to keep the vehicle driving on the road. I used a combination of center lane driving, recovering from the left and right sides of the road. The training data used to train this model was a combined set of the couple recorded successful driving laps and other datasets that emphasized handling the sharp curves. Data was split 20% for validation and 80% for training. Data augmentation is fundamentally important for improving the performance of the networks, it allows the network to learn the important features that are invariant for the object classes, rather than the artifact of the training images. We have explored two different ways of doing augmentation to artificially increase the size of the dataset. Adam embraces the benefits of both AdaGrad and RMSProp:

The overall strategy for developing the model architecture was to use a known architecture model as a base start and modifying it as required. One of the models I tried was NVIDIA's model "End to End Learning for Self-Driving Cars" 5 convolution layers with filter size 5x5, 3x3, and 2x4, but the result were not very good. On the other hand, I used end GoogleNet stem (the first part of the architecture, with some twists) and I was able to have very good results with that one. With this architecture, the car can complete multiple laps around the track with no issues. The model has one normalization layer, ELU(Exponential linear unit) activation layer after every layer are used to introduce non-linearity, and zero padding feature to control the spatial size of the output volumes and to smooth the training where neurons don’t fit neatly and symmetrically across the input. Training time is about 94s per epoch, and the validation loss 0.0117.

The model used an adam optimizer, so the learning rate was not tuned manually (model.py)

To reduce overfitting in the model, the model contains two dropout layers in the first two fully-connected layers and Max Polling Layers periodically inserted an in-between successive Conv layers. Polling Layer used has filters of size 2x2 applied with a stride of 2 down-sample every depth slice, discarding 75% of the activation. Without dropout, the network ex-hibits substantial overfitting. Dropout roughly doubles the number of iterations required to converge.(model.py)

Dropout technique consists of setting to zero the output of each hidden neuron with probability 0.2. The neurons which are “dropped out” in this way do not contribute to the forward pass and do not participate in back-propagation. So every time an input is presented, the neural network samples a different architecture,but all these architectures share weights. This technique reduces complex co-adaptations of neurons, since a neuron cannot rely on the presence of particular other neurons. It is, therefore, forced to learn more robust features that are useful in conjunction with many different random subsets of the other neurons.(6)

There were two spots where the vehicle fell off the track. One of the spots was the curve with dirt on the side and the other spot was at a sharp curve. To improve the driving behavior in the dirt curve, I recorded more data from the dirt curve and in combination with the data already being used, I was able to pass that part. To resolve the second issue, I increased the offset for the side images to 2.8 and incorporate it to my training data as a set of horizontal flipped side images with their corresponding inverse label. I noticed that a small offset to the side images were causing the car to get too close to the sides on sharp curves; causing the car to get off the road.